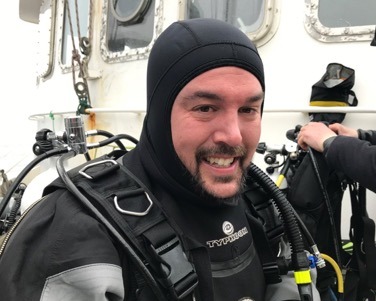 Ander arrived in the Falkland Islands in 2018 to take up a position as the project manager for the Fine Scaling of the Marine Management Area project (DPLUS071) at SAERI. With SMSG being one of the project partners, Ander quickly became involved with them in order to conduct part of his research in remote parts of the islands. He has now become part of the SMSG family and is looking forward to diving with them outside the scope of his project.

Prior to arriving in the Falklands, Ander, who is originally from Spain, has lived in various corners of the world over the last 18 years. In many of these locations, he has gotten to enjoy some amazing diving. Professionally, he completed his PhD in 2012 in South Africa focusing on the transfer of organic matter between marine and terrestrial ecosystems and how these transfers sustain complex benthic food-webs. He later conducted research on the geological evolution of Maputo Bay, Mozambique, over the last 12,000 yrs. Prior to his arrival in the Falklands, Ander was a senior lecturer and researcher at the University of Seychelles.